Sunday the 7th February and a trip to Letchworth for our final EC1 tournament of the 2015/2016 season, our first game was against the home team Letchworth B and with an 8.30am start it was never going to be easy.

Soham started brightly and any evidence of nerves were soon settled with an early goal followed by a second, a solid performance which ended with a comfortable 5-1 win.

Our second game was simple, beat Kings Lynn and Soham would win the league, the only problem was Lynn hadn’t read the script and out played us in the first half as we closed at the interval 2-0 down. Full credit to the players who came out for the second half a different team and, although maybe not at their best, did enough to turn the game around scoring two second half goals to draw the game 2-2. Great character shown by our players who never gave up believing!

Despite this draw we still needed a win to secure the title. Our next game was Bury and this simply was one of those games where nothing we did seemed to work, tiredness from the previous game, nerves, or basically just trying too hard to get over the finishing line, who knows? Having remained undefeated for sixteen games I suppose it had to come, taking nothing away from Bury who played very well, we simply didn’t !!! Final score 6-3 and our first loss.

Now we had our first two game break of the day and a chance to regroup and rest, Cottenham our next opponents and quite frankly this was a must win situation. Finally Soham found their form overwhelming a bewildered Cottenham 11-0 finishing the tournament in style and securing the Eastern Counties division one title. Well done to all the players, 18 games, 14 wins 3 draws and 1 loss and the winners trophy in only our second season.

Soham’s season kicked off last Saturday with our first Eastern Counties Division One tournament of the year and 4 out of 4 wins on the day!

Results and team photo from the day below:

Team on the day: 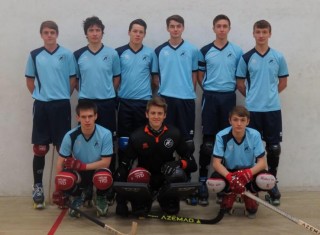 Soham Roller Hockey club brought the curtain down on their first season with a fine win at the Eastern Counties Cup Finals. The club’s under 20’s team won 4-3 in a thrilling final against Kings Lynn giving them both Regional and National Under 20 titles.  The club’s senior team also played in the Senior 1 regional final again against Kings Lynn.  Despite a 0-0 half time score line we eventually lost out on this occasion.

What a great first season, both on and off the rink with our teams winning one league title and two cup finals, two of our players receiving individual national awards, six of our players called up to represent their country at schoolboys, junior and senior level and finally to the wonderful people working behind the scenes organising, fundraising, time keeping and again delivering another blockbuster stall at this year’s Eastern Counties Cup Final.