Soham returned to their winning ways on Saturday with a comfortable win over Halifax. We opened the scoring in the second minute of the game and from that point onwards the result never looked in doubt, a very solid first half performance closing for the break 6-1 up.

The second half started well for us as we opened the gap further. With such a comfortable lead we started to relax and lost a bit of concentration costing us a couple of goals. Final score 10-4.

A good day at the office for Soham’s young team who coped very well with Halifax’s clear frustration throughout the game. Another young man worthy of a mention was Conor Colbert, who equipped himself again very well to the job, our thanks go to him and Dave Fothergill for giving their time up to referee the game.

Three games into our first premier league season, two wins and a narrow defeat to the current league champions. Not bad for the youngest club team in the league.

Soham’s premier league team consists of two goalkeepers and six outfield players with an age range of 16 to 21, with three of it’s members actively studying at university. 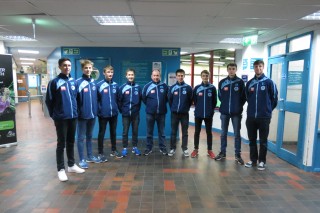 Soham’s premier league team taking a moment out before setting off home after a hard fought victory at Grimsby.

Young we may be, however all eight players have played European Schoolboys for England, six have played at Junior level and three made their senior debut in La Roche-Sur-Yon, France earlier this year.

Add to that, two Schoolboy and one Junior level captain and you start to understand the quality and experience we have in such a young team.

Despite a promising start we will all keep our feet firmly on the ground and stick to our goal and aim we started the season with. Our goal, English Premier league survival and our aim, to enjoy every game and develop the players and the team for the future.